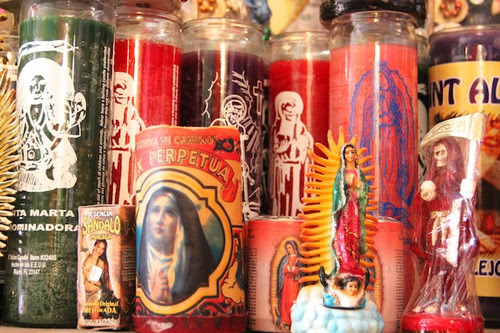 Our Lady of Guadalupe reigns here.
By AMARIS CASTILLO
It’s difficult not to feel overwhelmed when you step inside La Sirena. Located in New York City’s East Village neighborhood, the tiny store reminds me of a kaleidoscope, with its endless stream of colors. As El Grito approaches (the September 16th celebration of Mexico’s independence from Spain in 1810), I stepped inside this magical world, dedicated to the beauty and culture of Mexico.
My eyes don’t know what to focus on first. A long string of ornaments hang along a wooden shelf to my right – everything from clay birds to a heart with the image of Frida Kahlo on it. Small skeleton figurines fill an entire bookshelf to my left – there to honor the Day of the Dead, or Día de los Muertos. Singer/songwriter Lila Downs plays in the background. 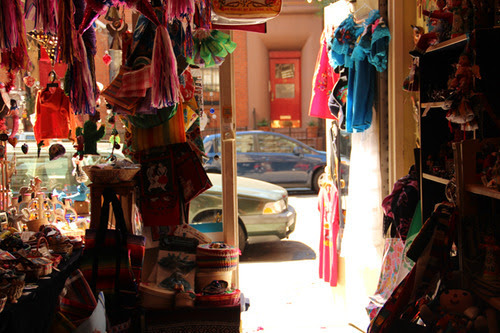 A peek inside Dina Leor’s Mexican folk art store.
There are knickknacks everywhere, it seems, most of them from Mexico - with dips into Peru and Guatemala.
Though the shop is small, owner Dina Leor maneuvers around it like a pro. After having the same location for 13 years, anyone would. 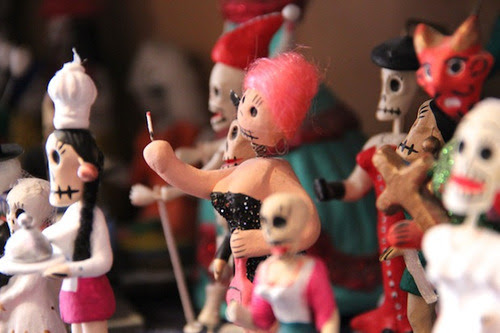 Fun figurines honor the Day of the Dead, or Día de los Muertos. Peep the super sexy pink-wigged skeleton with her cigarette and major cleavage.
After she opens the store, Leor begins each workday by hanging bags for sale outside. There are several religious candles by the doorway, which she bends over to light.
Leor gingerly places a vase beside the candles. Filled with red roses, it’s a gift for Our Lady of Guadalupe.
“She’s my sweetheart,” she says of Mexico’s patron saint, known in Spanish as La Virgen de Guadalupe. 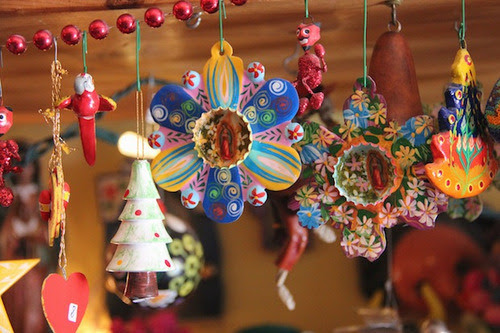 Leor was a burnt-out teacher before she opened La Sirena. During that time, she says nothing would revive her like Mexico would - which is probably why Leor’s friends call her shop a “living altar.”
“I’m actually Argentine-American with a Mexican heart,” she tells me with a smile.
And after Leor tells me her story, I believe it.
As a girl, Leor’s Argentine parents would take her to Mexico almost every summer. She loved the country deeply – so much so that she almost ran away once. She really wanted to stay there.
“I still cry on the plane coming home,” she says. It’s a love that remains - Leor used to travel several times a year to Mexico to relieve stress, as well as to shop for folk art.
No one has stepped inside the store yet, so as Leor continues to set up, she goes into detail about her love for artisan work, which stems from early childhood. Leor grew up making art with her paternal grandmother; they would make quilts, clay and mosaic pieces together.
“My fire and passion for creativity started with her,” she tells me. Leor’s grandmother passed away when Leor was eight.
“That closeness that I feel in Argentina and Mexico, I had with my grandmother,” she says. 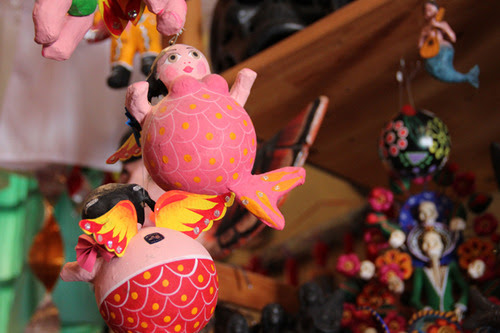 These papier-mâché plump mermaids (or “sirenas gordas”) come from Guanajuato, Mexico. “There are a lot of mermaids in Mexican culture and folk art and, obviously because my store is called La Sirena, I’m always seeking them out,” Leor says.
Leor has traveled far and wide in Mexico for art’s sake – Oaxaca, Puebla, Mexico City, and Michoacán are just a few areas she’s purchased work from. The coast of Oaxaca, for example, has beautiful textiles, Leor tells me. Most of the wares Leor sells at La Sirena come directly from the artisans who make them, and in other cases, wholesalers of folk art. 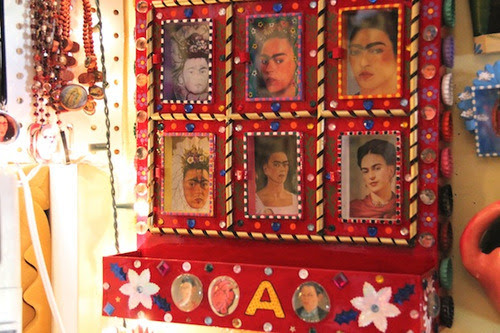 One word - Frida.
Over the years, the owner of La Sirena has become friends with many artisans. One of her favorite artisan families is the Aguilar family, a group of sisters and one brother who reside in Oaxaca.
Leor tells me about the family’s great grandmother, who looks as though she’s pushing her 90s. “She’s up there,” Leor says.

The elderly woman, who was sanding a piece of pottery, initiated the family’s folk art. Nearby, her daughter-in-law worked on a clay figurine as she gave milk to her baby.

“I feel like it’s a natural evolution of life – the folk art and the life is all one,” Leor says. “It’s not like you go to school and learn it… you learn it at home, which is so beautiful.” 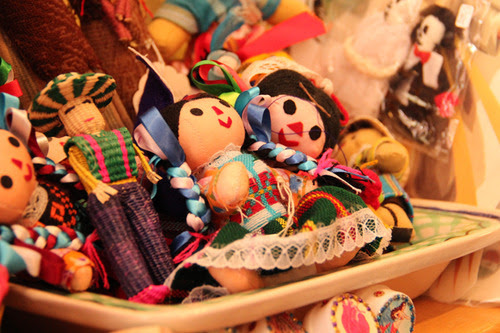 These traditional dolls hold a place in many Mexican childhoods, Leor tells me. “I call them las muñecas aztecas - the Aztec dolls,” she says.
As Leor speaks about Mexico and the closeness of artisan families there, my mind jumps to the concrete jungle that is New York City – a place where, in many ways, you’re on your own. Survival of the fittest, if you will.

I ask her what she feels the differences are between both Mexico and NYC. There’s a bit of hesitation at first.

“Culturally, we’re very individualistic,” Leor says carefully. She goes on about how many families here are more separated. 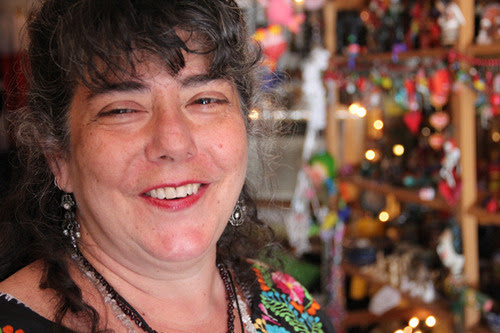 “My family in Argentina would all have lunch together every day and we’d go pick up the grandparents to have lunch with us,” she recalls. It was very warm. People would have their disagreements, of course, but Leor believes it’s a healthier environment to grow up in.

Our conversation shifts to La Sirena’s merchandise. I ask Leor which is the store’s most popular item. It’s hard to say, she points out, but t-shirts and Mexican lucha libre are daily sellers. 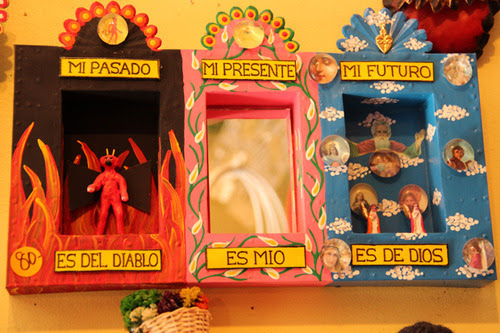 The above “nicho” (or decorative box) was made by an artist named Alejandro, from San Miguel de Allende, Mexico, who likes using sayings in his work. This one reads “My past belongs to the devil, my present is mine, and my future belongs to God.”
During our conversation and Leor’s tour, several customers step inside the tiny shop - all on a mission. One woman stops by in search of Mexican wrestler figurines - they’re a gift for a boy. Another customer comes in search of a traditional Mexican dress, the kind with intricately embroidered roses along the collar. Leor herself wears a traditional Mexican blouse that day - she calls it her “uniform.” 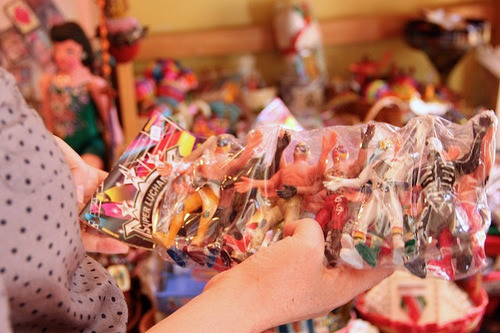 A La Sirena customer feels a package of Mexican lucha libre figurines before deciding to purchase them.
Even if Leor feels down, La Sirena brings her spirits up.
“I always feel good in here,” she says.
Despite the joy it brings to others, La Sirena’s days are numbered. Leor tells me her landlord raised the rent 42 percent – a price she can no longer afford.
While she figures out her next move, Leor’s focus has begun to shift to a dream she has always had; creating a cultural space that would be the home of art classes, gallery exhibitions, and language exchanges. It just depends on finding the right space, and, of course, the financing. Leor says she might start a Kickstarter campaign for this — the culmination of all her dreams — but nothing has been decided yet.
“I feel like it’s the universe saying, ‘Okay chiquita, it’s time to move on,’” Leor says, in reference to the store’s rent hike. She claps her hands for emphasis.
But whatever happens, Leor maintains that she still loves what she does at her tiny shop at La Sirena.
“It makes my heart sing.”
(Photos: Amaris Castillo)
Posted by lasirenanyc at 1:35 PM No comments: